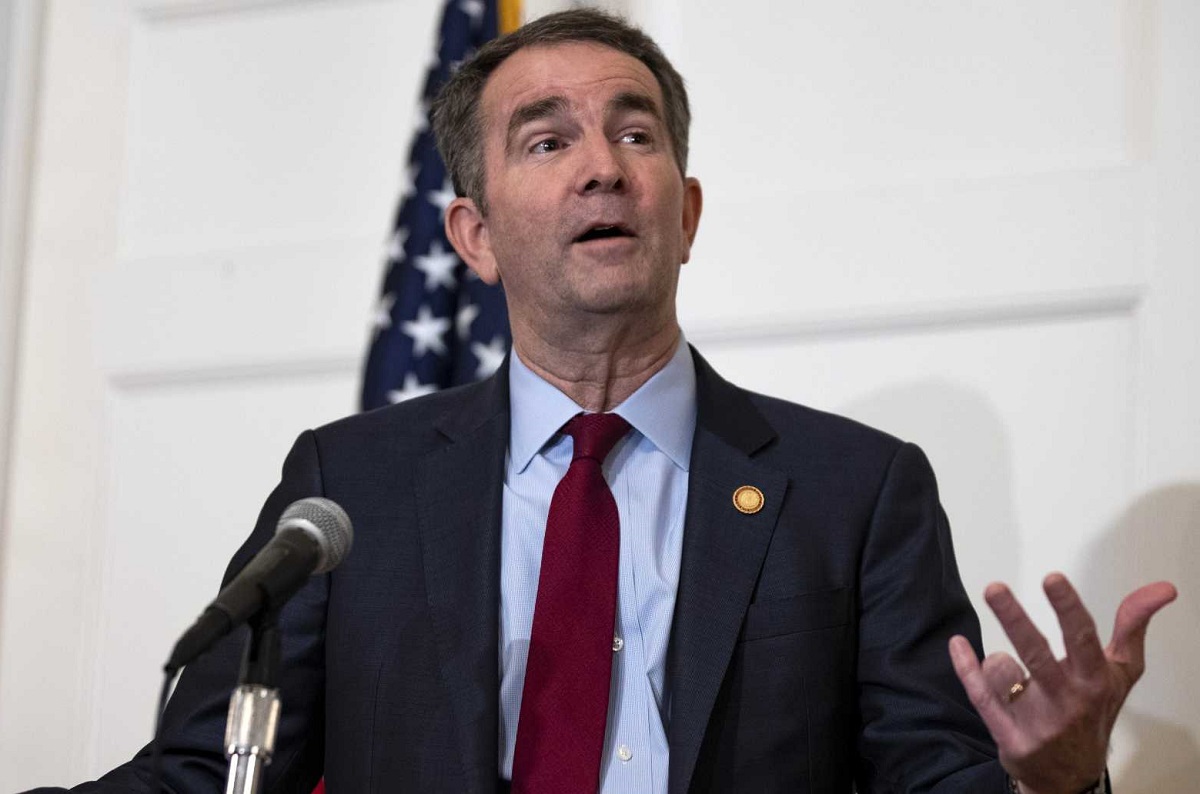 Punishing people for decades old non-criminal behavior sets a dangerous precedent. In a society with rapidly changing norms, any of us could be next.

When a 35-year-old photo surfaced showing Virginia Governor Ralph Northam dressing up in either blackface or a Klansman’s outfit, or at least putting the image of two people in those costumes on his yearbook page, it seemed like only a matter of time before he resigned. If Megyn Kelly was fired just for suggesting that blackface wasn’t always inappropriate when she was growing up, Northam stood little chance. After an awkward press conference in which he denied being in the yearbook photos but admitted wearing blackface to dress up like Michael Jackson, our cultural Queen of Hearts was ready to make her latest decree.

But before he could save the day, Fairfax got embroiled in his own scandal. Vanessa C. Tyson, an associate professor at Scripps college, accused him of forcing her to perform oral sex in 2004. Then a second woman accused Fairfax of rape. To make matters worse, the third person in line for the governorship, Attorney General Mark Herring, also admitted to wearing blackface when he dressed up as rapper Kurtis Blow in college. Fourth in line is Kirk Cox, a Republican who won his seat after having his name drawn out of bowl. So outrage and resignations won’t get us out of this mess. But maybe that’s a blessing in disguise.

Our Cultural Queen of Hearts

The past few years a vocal subset of progressive Democrats has had a Queen of Hearts “Off with their heads!” mentality in response to “insensitive” or “offensive” language or conduct, or any form of sexual impropriety (other than infidelity). A predictable pattern has emerged.

First, someone unearths or reveals behavior from a prominent person’s past that many consider offensive or inappropriate in 2019, but that was much less controversial—and often unnoticed—when it originally occurred. Examples include director James Gunn’s decade old tweets, Northam’s 35 year old yearbook page, or the 2006 photo of Al Franken pretending to grope Leeann Tweeden.

Next comes the outrage and the pile on. The most aggressive virtue signalers and Social Justice Warriors dominate social media, telling us how what the offender did is “unacceptable” or “just plain wrong.” Once prevailing opinion has turned against the accused—which usually happens quickly—politicians or celebrities pile on, calling for the offender’s termination or resignation with platitudes about how we must “take a stand,” or “heal and move forward.”

Few brave souls challenge the tidal wave of outrage, urging us to slow down and consider thorny questions about punishing past behavior. What’s the upside of confronting a Twitter mob when pleas for reasonableness will likely get you accused of defending racism, homophobia, or sexual assault?

After the pile on, the Queen of Hearts renders her verdict. The offender either gets fired so a company can protect its reputation (Gunn or Kevin Hart) or resigns because enough colleagues have turned on them to undermine their effectiveness (Franken). The approach isn’t so problematic when the offender truly deserves to be fired (Kevin Spacey or Harvey Weinstein). But lately, more people are questioning the Queen’s decisions.

Gunn was hired by Warner Brothers after he was fired by Disney. Questions about her response to the accusations against Al Franken continue to dog Kirsten Gillibrand. And Ellen Degeneres tried to get Kevin Hart his job back.

So although the Queen of Hearts mentality has gotten rid of some truly awful offenders, it’s not a sustainable approach. Virginia’s scandals, in which every potential governor has questions about their fitness for office, are a chance to consider whether we can do better than outrage and resignations, and why punishing others for their past, non-criminal behavior, could come back to bite us.

Judging The Past in The Present

We should be careful when judging past behavior and doling out consequences in the present, not only because fairness demands it, but because nobody knows how today’s behavior will be judged in the future. One foundation of any legal system is that you can’t punish people for conduct that wasn’t illegal when it occurred. This is done so potential offenders know what behavior society considers wrong and have time to obey the rules.

Though there are additional considerations outside the legal system, there’s a strong argument for following the same logic.

For example, while many people were offended by blackface in 1984, it’s undeniable that blackface is far more controversial in 2019. Northam, born in 1959, grew up in an era when blackface was relatively common. He would have been exposed to it repeatedly growing up. Before he chose his infamous yearbook photo in 1984, Northam may have seen Trading Places gain critical acclaim and box office success in 1983, despite featuring a main character who wore blackface. Even after Northam’s yearbook photo, throughout the 90s and into this millennium, many public figures including Jimmy Fallon, Fred Armisen, and Jimmy Kimmel, have donned blackface as well.

To be clear, nobody is arguing that blackface wasn’t still racially insensitive in the 1980s. But none of those performers, producers, or filmmakers were pushed out of their jobs. All of which begs the question: if it’s not fair to throw someone in jail today for conduct that wasn’t illegal when it happened, what principle explains why Northam should lose his job in 2019 for doing something that was fairly common and not even widely criticized in 1984?

Judge Not Lest Ye Be Judged

Politicians like John Ensign or Newt Gingrich used to resign in disgrace when their marital infidelity was exposed. Now, politicians who cheat on their spouses or break up marriages become Governor Arnold Schwarzenegger, or Governor Gavin Newsom. In 1987 Douglas Ginsburg had to withdraw as a Supreme Court nominee because he had smoked marijuana. Today, it wouldn’t matter. If yesterday’s sin is today’s “no big deal,” today’s “no big deal” can become tomorrow’s sin, and anyone can be a sinner.

In 2019, it’s safe for most of us hiding behind our computers to criticize Northam’s blackface because we had the benefit of growing up in an era when blackface was more universally condemned. We had more warning than Northam, so we can rake him over the coals and not fear for ourselves.

But how many of us went to at least one questionable party in our twenties—a “Pimps and Hos” party or a party that embraced some distasteful stereotype, or even just wore a controversial Halloween costume? What if ten years from now those missteps are vilified the way blackface is today?

What if in 2025 outrage culture revisits infidelity or lying? Better yet, what if we decide to scrutinize people’s professional lives the same way we scrutinize their Twitter feeds and yearbooks? Personally, I thought the Trump University scandal and the record of Trump’s businesses not paying their workers should have disqualified him in voters’ minds. But what about Kirsten Gillibrand’s decision to use her law degree to defend tobacco companies? Isn’t that arguably more harmful than a handful of insensitive jokes or than Mark Herring dressing up like Kurtis Blow?

Whether it’s college indiscretions, infidelity, lying, or professional missteps, are we all prepared to fall on our swords when our behavior that was once considered questionable becomes “unacceptable?”

Punishment or a Path Forward?

Finally, as we’re mulling over the merits of punishing past behavior, we should try to find a middle ground between letting things slide and “Off with their heads!” Instead of pushing Northam and Herring out of office, perhaps they can keep their jobs and set an example by supporting legislation that addresses both present day racism and Virginia’s troubling legacy. Instead of stepping in between elected officials and their constituents, as Democrats did with Al Franken, maybe politicians in other states can let Virginia’s voters decide how to move forward. Or we can follow Barack Obama’s example.

When Obama was running for President in 2007, one of the other Democrats in the race, an older white man, said Obama was “The first mainstream African-American who is articulate and bright and clean and a nice-looking guy.” Critics labeled the offender a racist.

The offender called Obama to apologize but Obama said that wasn’t necessary. There were more important things to worry about and he believed the commenter didn’t “intend to offend anyone.” Obama focused not on what angry outsiders thought of the seemingly racist remark, but on what he thought was in the man’s heart. Later, Obama made the offender, Joe Biden, his Vice President.

It’s easy to get upset and demand that people lose their jobs when we learn that they did or said something offensive years ago. But if thinking and forgiving rather than reacting and demanding was good enough for Obama in 2007, we should probably err on the side of giving people a second chance today. After all, in a few years we may need them to return the favor.

1 thought on “Blackface, Outrage Culture, and The Risk of Punishing Past Behavior”